A pictorial “World of Magic” unfolds in the works of Sophia Kalogeropoulou. Her works are inspired by Greek traditions and the Byzantium, by the belle epoque and fairy tales, by nature and music and especially by the opera – as she was once a soloist of the Lyric Theatre – is an energetic and imaginative contemporary creator, which constantly attracts interest and pleasantly surprises viewers of all ages.

The intense, colourful and lyrical compositions convey stories that come to life, they showcase “heroes” and “incidents” from mythology and history, memory and longing, surreal reality and dreams. In this world the spectator is trewated to the intensity and emotion that the works create.

With naïve style, the painter travels the spectators with magical carpets suspended in a world of colourl. With a prominent influence on the work of Theophilos, the great naïve painter, it captures different episodes of Greek history and episodes of imprinted in our collective memory, which coexist in a fairytale landscape, in a sphere between of dream and reality.

Different spaces and periods are rhythmically and unexpectedtly connected through an exotic and at the same time nostalgic mood, with enigmatic humor, and poetic shaped figures of the painter. With the imaginative, the source of sustainability of her looks and the psychosynthesis of the unpredictable, as well as incompatible of child innocence, which Sophia Kalogeropoulou adopts, she weaves through her works a transcendental and heavenly place, where among the seas and mountains, churches and streets, the festivals of the past that meet the present and the East in the West. 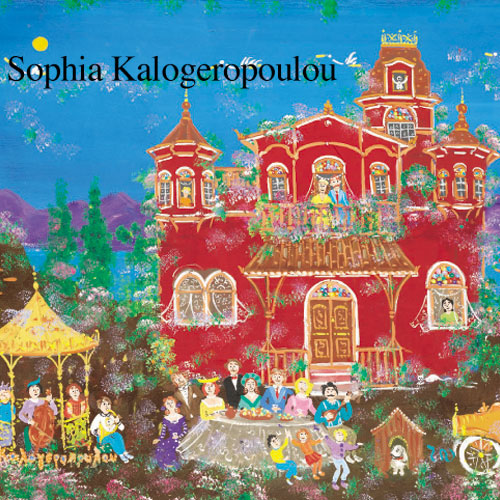