Nikolas Antoniou
The Sense of Self 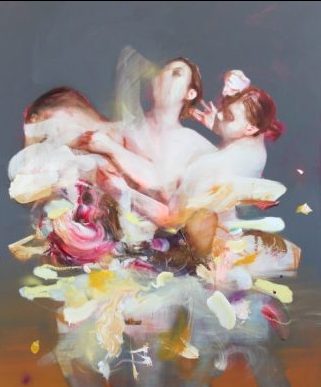 Quantum physics supports that there is no single objective reality but there exist many forms of reality dependent on who and how each person measures and conceives them. Therefore, what we call reality is nothing more than an image that we create based on our physiology, with what we are able, but also choose, to perceive.

Based on this logic, and taking a romantic stance on the issue, we could deduce that each person’s brain creates perpetually. By using the tools one possesses, in other words, our senses, elements and energies combine to produce images; images that one later calls “reality”.

Moments, man, become isolated, giving power to his ego, and be looks like he is drifting helplessly, going around in circles within his own self as he finds himself submerged and dazed inside the material space he believes engulfs him.

The subject-matter does not stem from a specific idea or theme. Rather, the artist consciously avoids focusing on specific questions or particular answers and instead, creates new images, which generate unknown questions. Thus without great thought, he creates vague spaces, objects which appear to be misplaced, both relative to time and dimension, next to items disjointed, with abstract figures portrayed in an intense environment, but which achieve a coexistence and interaction which gives significance to their existence, communicates a story and expresses a sentiment.